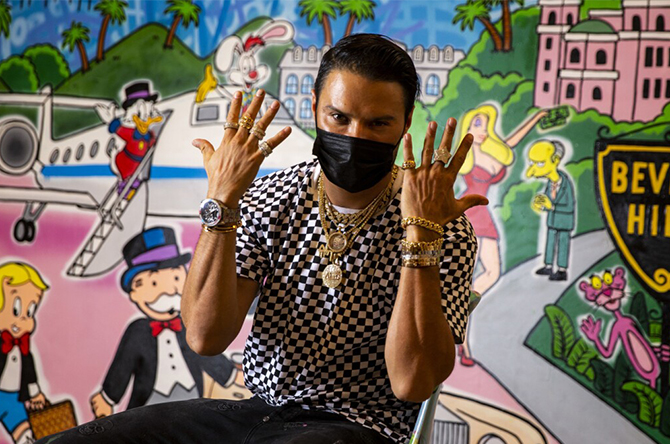 What I think about Alec Monopoly!

Home » What I think about Alec Monopoly!

Alec Monopoly is an artist I have followed and admired for over ten years, however, regrettably I have only just started to add his works to the Me Art collection – he is self-described as a street artist who brings people into his artwork by using iconic characters. In my opinion he is one of the most nonconformist Artists on the planet, tearing up the rule book about what and how an Artist should be and rather than appeal to the traditional art galleries, Alec has used social media to enhance his reputation and he has successfully built an international fan base by commercialising himself and turning himself into a modern-day celebrity unlike any other artist I know. His artwork uses commercial characters and iconic people and often lends itself to famous brands whom Alec has collaborated with such as TAG and Philipp Plein.

His artwork appeals to the masses and often to the untrained eye is described as simple and even ridiculed as “dumb art to foolish people for large sums”, perhaps this is because he often uses bright colours and cartoon characters such as Monopoly Man, Richie Rich and Disney’s Scrooge Mc Duck portraying them in elaborate settings such as the world’s most expensive hotel “the Burj Al Arab” or hanging out of a private jet.

However, beyond the humorous and sheer indulgent nostalgia is an observation of how Wall Street and capitalists are ingrained in the culture, and how this translates into all our lives, an incredibly intelligent and concealed send-up of capitalism and perhaps criticism of our modern-day society, shedding light on a broken system.

What’s more interesting is the fact that Alec’s persona which has helped build the incredible following and celebrity status, could not be further away from this observation and in-fact screams ostentation as he is often captioned rain drop dodging on private jets and eating caviar whilst wearing garish gold chains as well as the latest items from the most recognised brands.

This month we begin with the launch of our brand new Richard Hambleton exhibition. Richard…